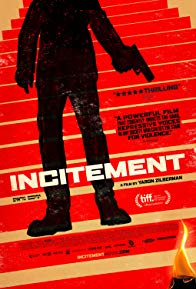 A psychological thriller, Incitement follows the year leading to the assassination of Israel's Prime Minister Yitzhak Rabin, from the point of view of the assassin. The film details, for the first time, the forces that act upon the assassin, including the religious and political incitement, the personal and the interpersonal turmoil. It is a psychological portrait of a political assassin seeking to kill democracy. It is also a portrait of a torn society on the brink of civil war.