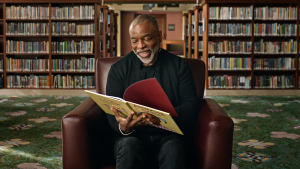 Birmingham’s own Bradford Thomason and Brett Whitcomb have previously played at Sidewalk with their documentary features GLOW: The Story of the Gorgeous Ladies of Wrestling, Jasper Mall, and A Life in Waves, among others. Now, we’re thrilled to open the 24th annual Sidewalk Film Festival with their latest documentary. Butterfly in the Sky is the story of the beloved public television show Reading Rainbow, the product of a committed team of educators and producers who used their platform to instill a love of reading in their young viewers. With long-time host LeVar Burton at the helm, they sought to create a kinder, more curious, and more empathetic generation. Now, those involved reflect on the success of their mission. This behind-the-scenes look at one of the most treasured children’s television series shows how this ragtag crew changed the lives of millions. Butterfly in the Sky recently premiered at the Tribeca Film Festival. Join us for the hometown premiere on Friday, Aug. 26, at the Alabama Theatre and stick around for our Opening Night Afterparty, right outside the theater on 3rd Ave. N.

We produce the nationally recognized Sidewalk Film Festival, the SHOUT LGBTQ Film Festival; organize a wide variety of educational programs for filmmakers and hold other events that create interest in and enthusiasm for independent film. To expand on this work and better serve our mission we have opened the Sidewalk Film Center + Cinema, a two-screen independent movie theater in the heart of Birmingham’s historic theatre district.