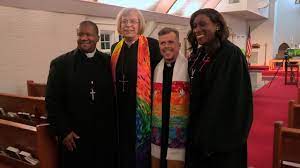 There are 30 transgender, ordained ministers in the United States. Six are in North Carolina. Dawn Flynn, Mykal Shannon, Liam Hooper, and Debra Hopkins fight intolerance and discrimination in the Bible Belt and battle narrow-mindedness within the religious community, fellow state natives, and their own families. In particular, the film follows Dawn, who at 61-years-old was publicly outed by a hairdresser. Being forced to reveal her double life sent Dawn on a downward spiral that cost her pastoral license, ministry, threatened her marriage, and made her wonder if life was still worth living. After therapy and deep self-reflection, Dawn fought back, making to decision to transition and start her journey to reclaim her life, finally finding the courage to embrace her truth and the calling to help others embrace theirs. But her battle for this new life left collateral damage such as her 30-year-marriage to her wife, Pam. Proper Pronouns is an observational film. In order to live as their authentic selves, some of their loved ones experienced personal identity crises. Each minister bravely preaches from a pulpit despite the danger they face not only as a transgender person living in the South, but also as transgender ministers navigating their way through local, state, and national governing bodies who decide what it means to be a human being.